I’m doing a little more on a simple handheld VLF receiver I’ve been working on. For an electric field receiver all that’s essentially required is a whip antenna and a high input impedance, high gain, audio frequency amplifier. Some filtering is desirable to limit the bandwidth and cut the noise of mains hum.

I’ve already soldered up the input & filter stages, yesterday breadboarded the output stage – an amplifier to drive a little speaker/headphones. But I’d forgotten a key consideration, how much overall gain the thing should have.

A quick google later, found this rather nice poster on NASA’s site, “Building and Testing a Portable VLF Receiver“. 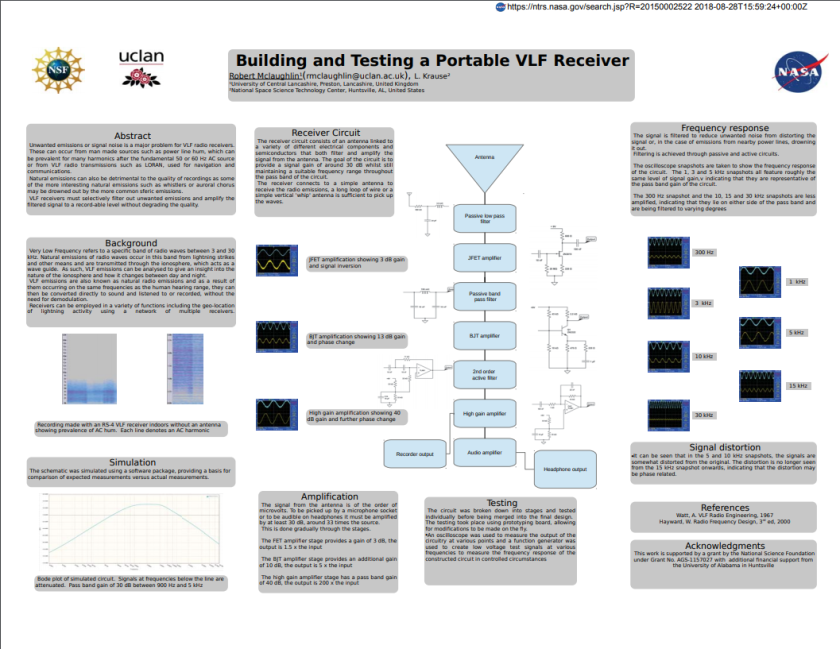 It doesn’t have the schematic – I expect it’s one of their INSPIRE models. But it does have what I was looking for. Signal is of the order of microvolts, their overall gain is x1500 – rather more than I’ve allowed for so far. There’s a feedback resistor change in my near future.

First though I reckon I’ll draw up the circuit as it stands (in KiCAD). I can figure out the gain bits from there, and simulate. I also need to check roll-off at the frequency extremes (call it 20Hz & 20kHz). Hmm, gain of 1500, that’ll be tempting to stability problems.

When I was looking for the gain requirements yesterday, I opened a bunch of the results in browser tabs. I found what I was looking for in the first, but am pleased I didn’t close the others. While vlf.it is the site for all things Radio Nature, I did stumble on some material I hadn’t seen before.

This page is notable : VLF Natural Radio Reception at techlib.com. It features a variety of simple receiver designs. One piece of utter genius jumped out at me. The major problem with VLF reception is interference noise, so ideally you want to situate the receiver a long way from sources of that – eg. houses, computers… Which is a pain if you want to record/analyze the signal. Here the author bends a baby monitor transmitter, replacing the mic with a VLF preamp. Voila, instant remote receiver.

“The antenna was horizontal and near the ground under my truck for this recording. That turned out to be a questionable location, by the way! Not only did several neighbors become alarmed by it, but a couple of police officers also spotted the thing. I must admit, it does have a bomb-like appearance! It spent the rest of the night under an overturned flower pot with the VLF antenna sticking out the little drain hole in the bottom.“.

Another very promising site I ran across, have still to read, is Larry’s Very Low Frequency Site. Looks like there’s some good material.

For now, back to the KiCAD.